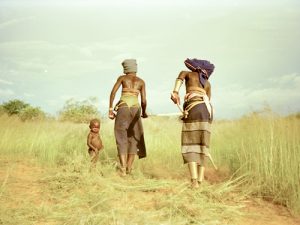 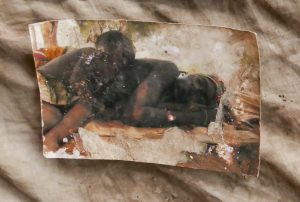 Farm Photo Display: effects of the passage of time in the bush 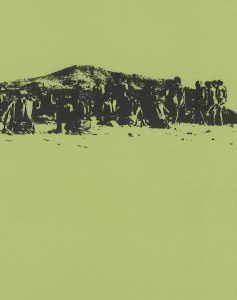 A process of selection: RDC's publication of his field photographs 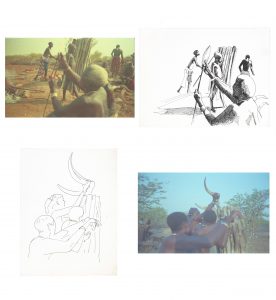 An Openness to experiment: archival reusages of RDC's field photography

What follows is a photo exhibition based on comments made in 2018 by villagers who live from farming and cattle raising in the highlands of Namibe province. The villagers, specially my hostess Madukilaxi, commented an album gathering field photographs from three ethnographers who have made field photography in the region between 1940 and 1995, combined with pictures from village life I made in 2012, during an 8-month stay in the same village. 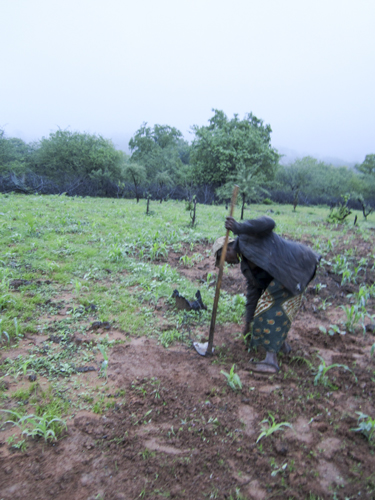 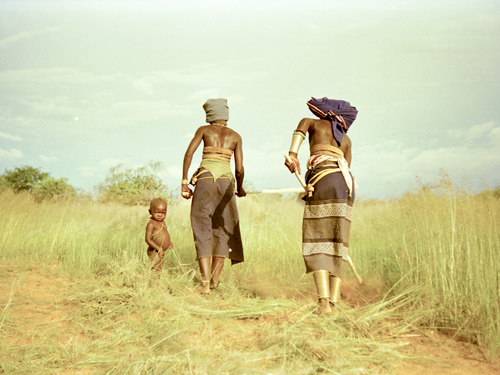 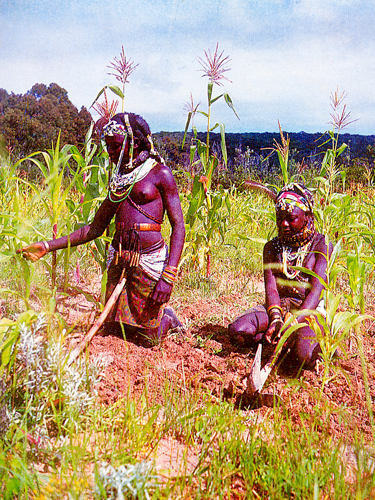 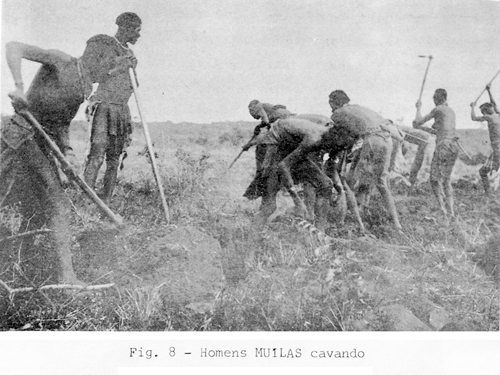 The women are farming, food will come.
When it rains, one farms. When is dry, no food will grow.
When it rains well, the water will make food appear.
If there is no rain, there will be hunger. 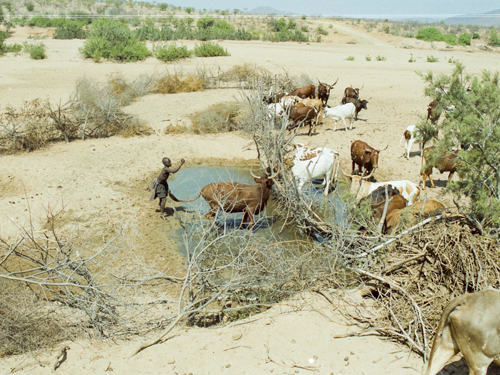 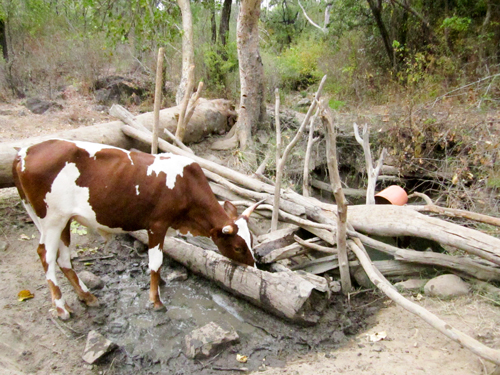 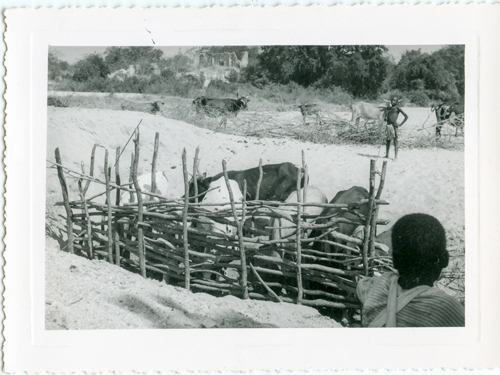 Farm Photo Display: everyday life, photography and effects of the passage of time in the bush

In 2012 I stayed 8 months in a highland village in the Namibe province, as a host of an agro-pastoralist family, in their farm. Before leaving, I gave them copies of photographs I had taken during the stay, which I had gotten in print from the city. In 2018 I returned to the village, bringing more copies – some of which of the same pictures I had given them years before. My hosts had separated the old photos in two, between husband and wife. To avoid repetition, I asked each of them to see the previous copies. Madukilaxi, my hostess, postponed showing them to me, until she disclosed that at some point, accidentally the copies had gotten rain, and had deteriorated.

What follows is a photo exhibition based on two photoshots in 2018, temporary displays at the farm. Showing everyday and special occasions and tasks, it also invokes the passage of time. The display pays hommage to my hosts lifestyle.

Madukilaxi and her youngest daughter, Lipuleni, after attending a party at a neighbour. Original photo taken in 2012.

My hosts live from domestic production, rain-fed agriculture and cattle raising. Their subsistance economy demands a daily active role of all the household members for short or longer term needs, according to the season. 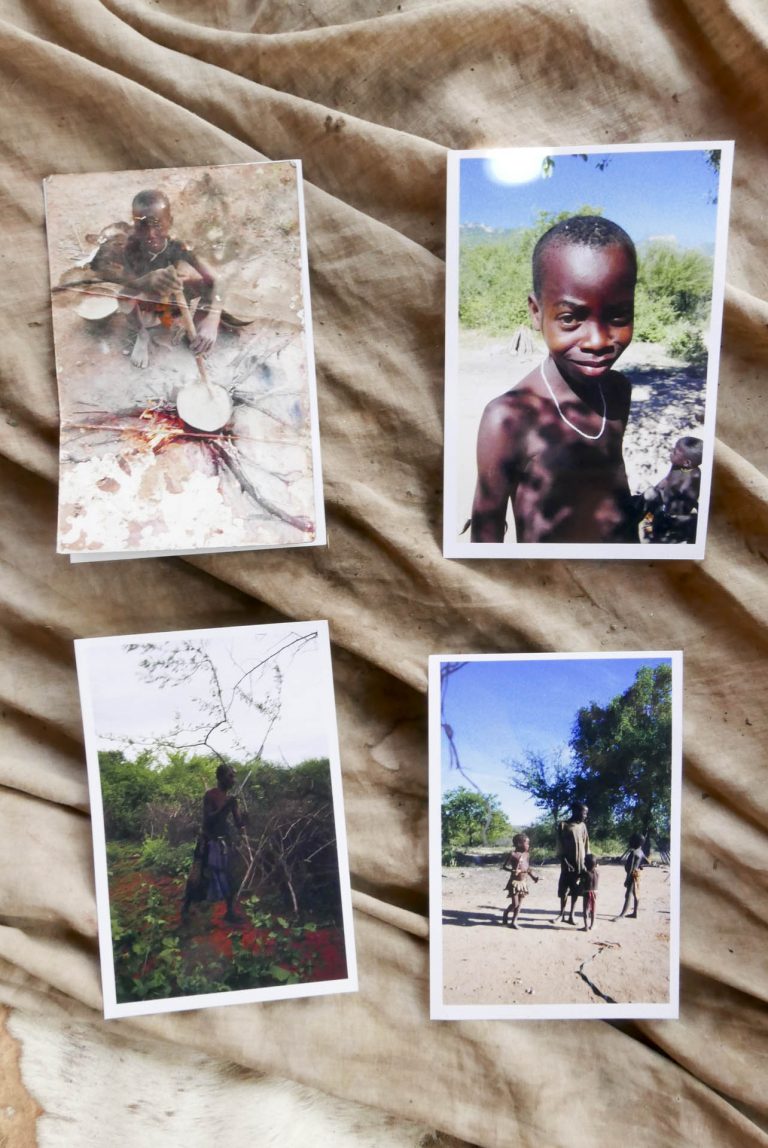 Top right: Kaundende showing off his new beaded necklace Madukilaxi made him. Down left: Omukipungo fencing. Down right: the children playing with Gaugenia, their elder brother that came visiting. Original photos taken in 2012, one copy from 2012, others made in 2018.

Ode to the family 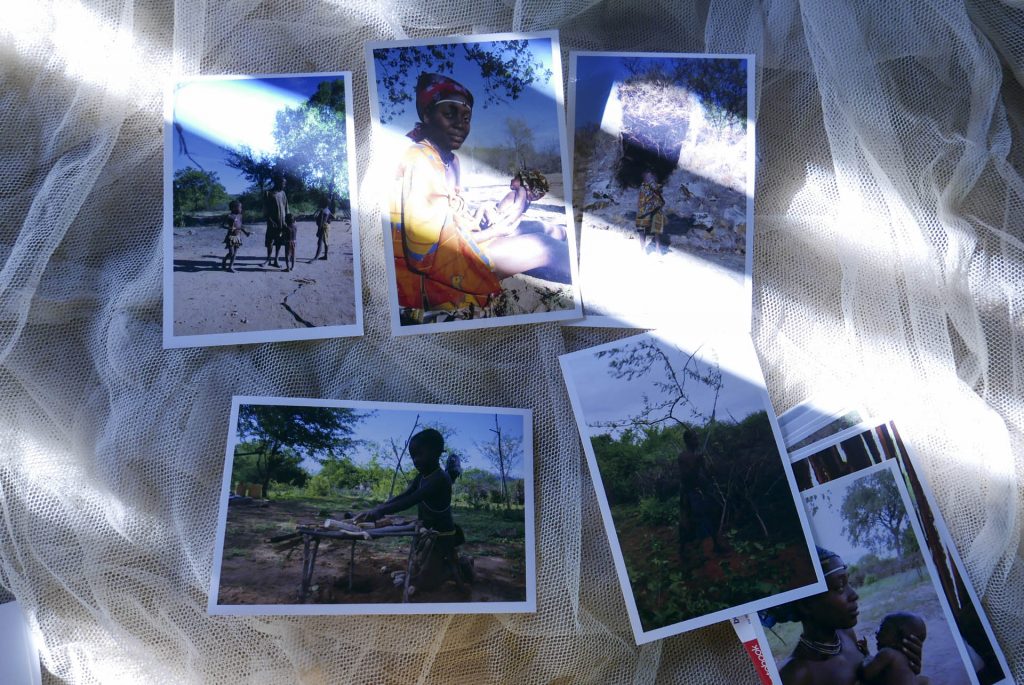 During the stay, my hosts asked to have pictures with me. Omukipungo was the selected photographer.

A process of selection: Ruy Duarte de Carvalho’s publication of his field photographs

In the early 1990s Ruy Duarte de Carvalho, during his fieldwork with Ovakuvale pastoralist communities, shot more than 1000 pictures, spread over 40 photo film strips, in B&W and colour. At the end of the decade, for one of his most ethnographic books, Vou Lá Visitar Pastores (1999), he decided to publish some of his field images. He printed an intermediary selection, around 109 images in high dual tone B&W contrast with no grey scale to use as proofs for his final selection. Vou Lá Visitar Pastores has 52 images.

By looking at his photographic production, the proofs and the final publication, we have traced Carvalho’s selection process. We applied the result in the following display – a graphic and representative edition of some of the filmstrips, signalling archived photograph, chosen proof and final selected images. 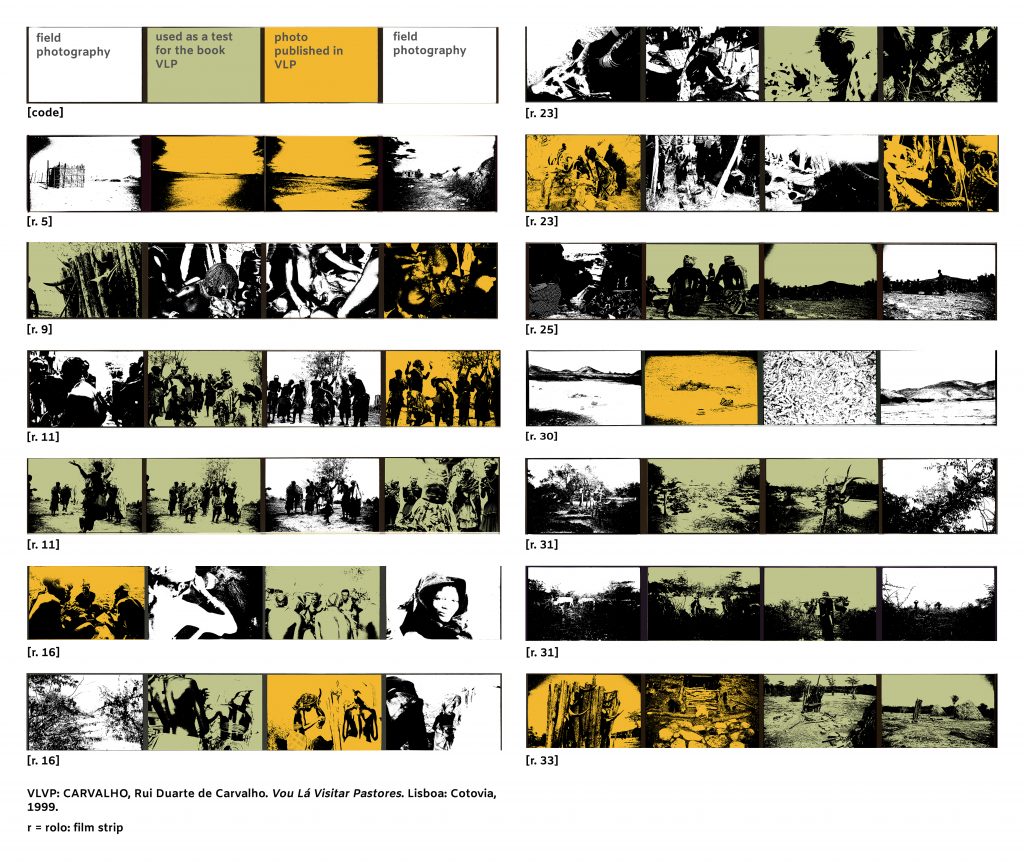 Images and captions accompanying the article published in Kronos, 2020, exploring various afterlives of the photographic production among the Ovakuvale by Ruy Duarte de Carvalho.

Figure 1: A zigzag as biography

Based on Carvalho’s outline of his life trajectory on a notebook, refashioned for display at the posthumous exhibition A Delicate Zone of Commitment, 2015.

Tracing Carvalho’s curatorial process, by looking at his photographic production, the intermediate proofs and the book. This filmstrip (roll 17w/1994K) has signalled archived photograph, chosen proof and final selected image.

Both coloured images depict women putting an old Oholongo horn on the thifa (showcase at the ceremonial altar) as a payoff to a spirit demanding this animal in particular to leave the possessed woman in the house. 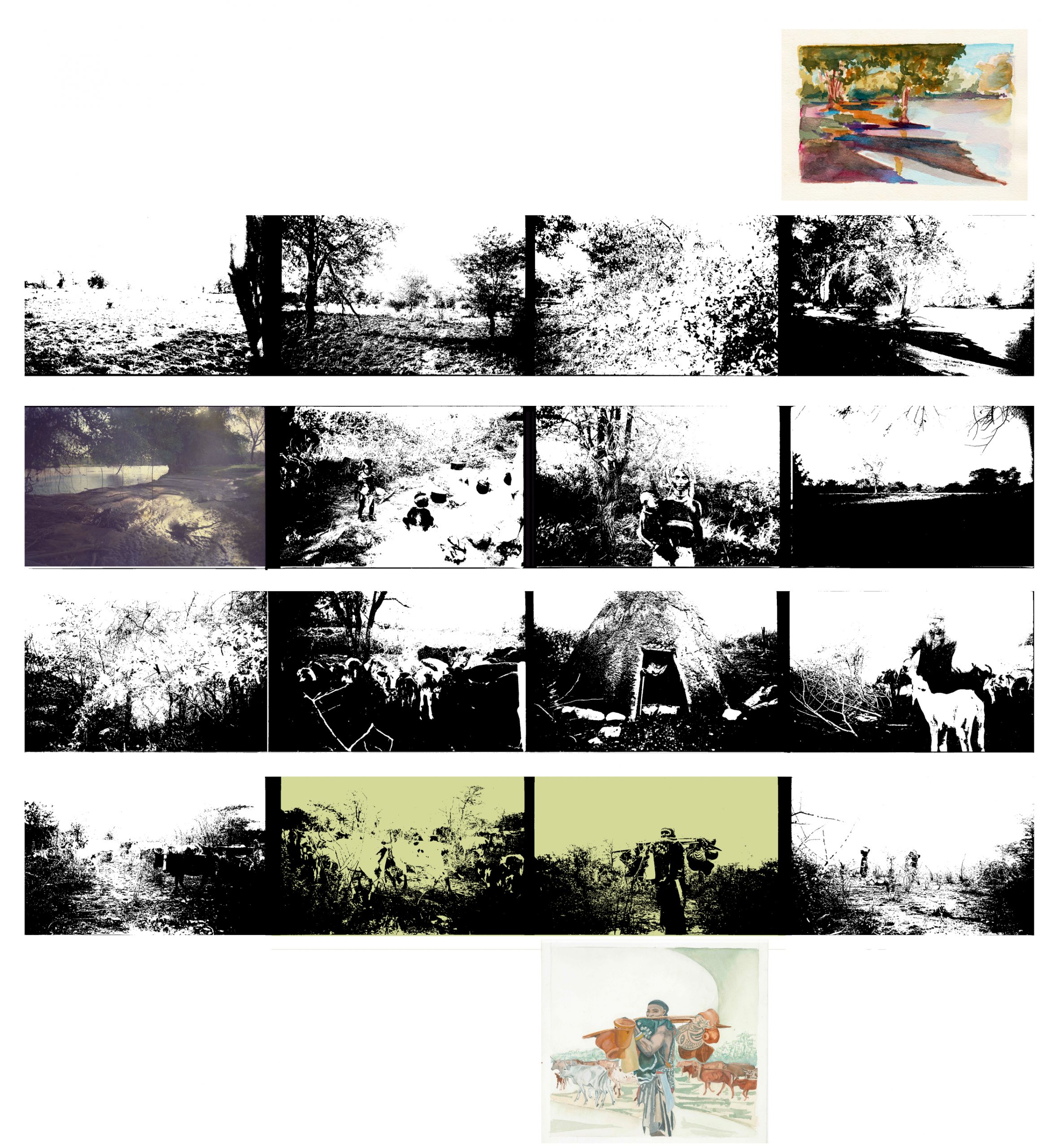 Juxtaposing Carvalho’s field production with later usages. The last 16 frames of R7w/1993: white filter signals archived negative; intermediate proofs from 1999 are signalled with a green filter. The images in Vou Lá had a white filter; yet I use yellow and green, the book’s cover colours, to signal published and intermediate repertoire. An image displayed in the 2008 exhibition (top second from the left) appears unfiltered. The drawings are undated. 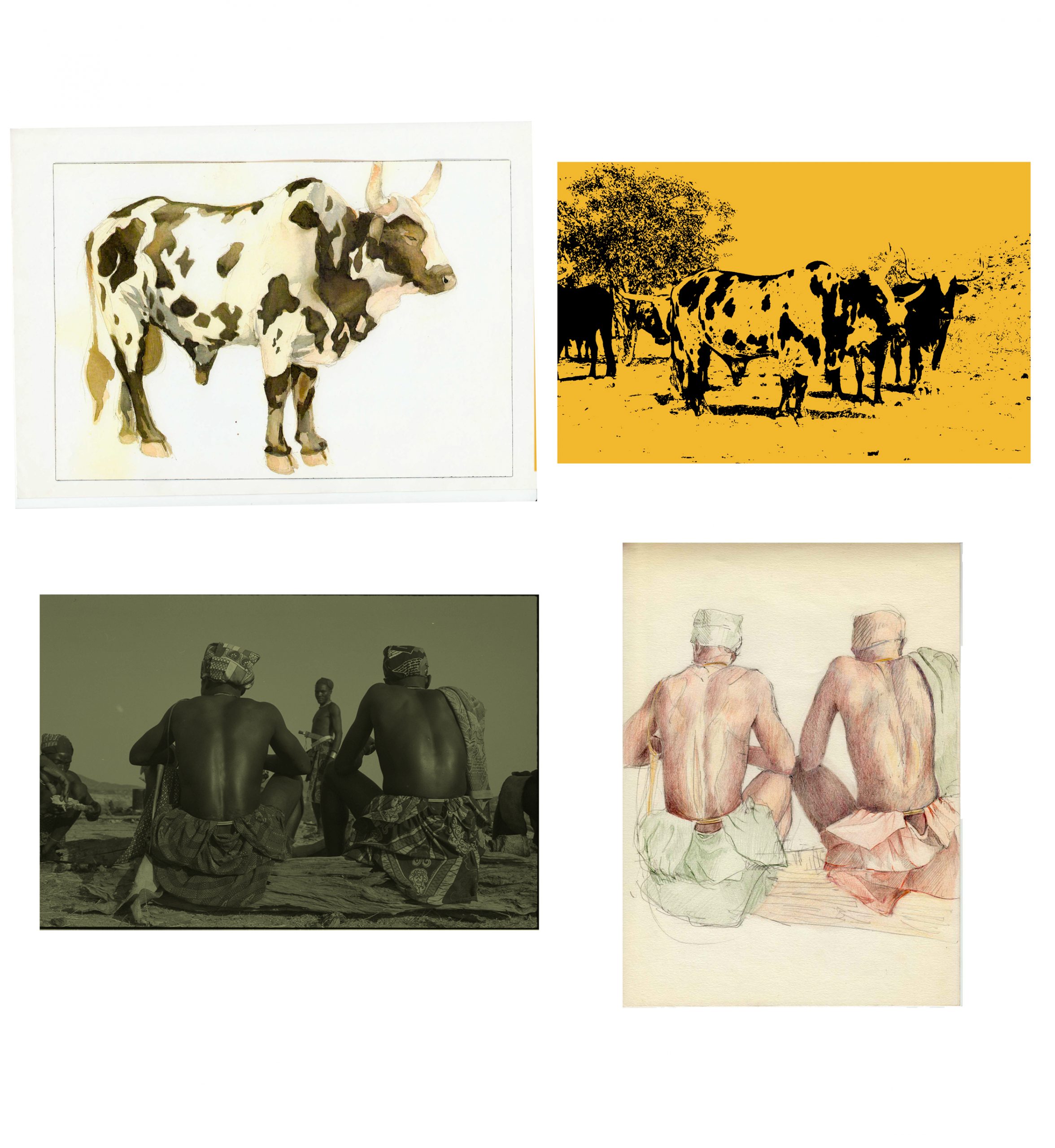 Watercolour of a dumenthu, a castrated bull, used for the promotion of the play at Culturgest, in Lisbon 2004, based on a frame from R17w/1994K which had appeared in the book Vou Lá (p. 271).

Below is a B&W version of a colour field photograph from R37w/1995, taken during a slaughtering and meat consumption meeting, used in a postcard announcing a later staging of the play, and Carvalho’s drawing inspired by the same image. 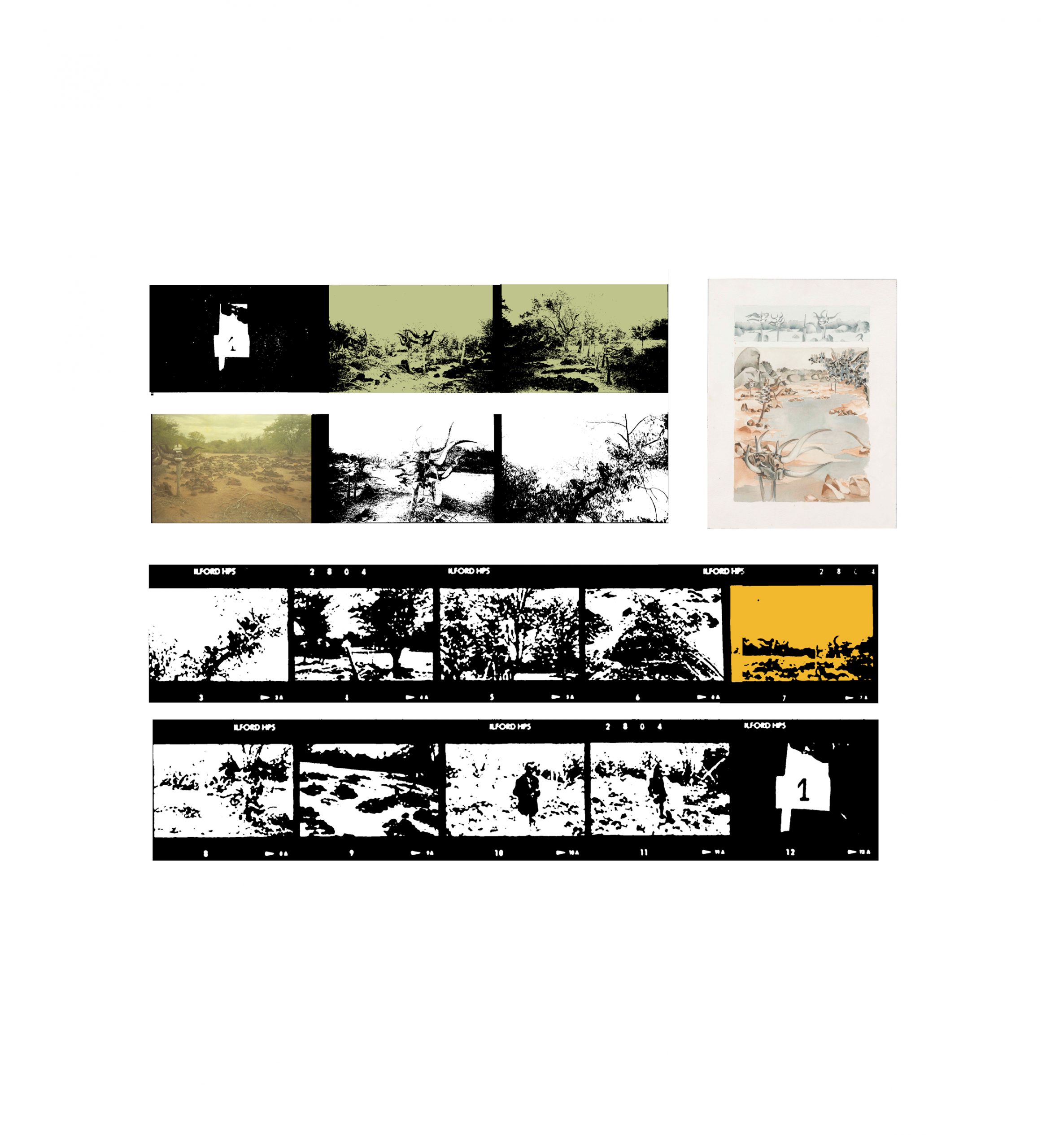 Figure 5: A handful of Layers

His fieldnotes show that the visit deeply impressed him; the 1999 outline indicates that Bahiputa, one of the Ovakuvale collaborators who Carvalho met first in his youth, accompanied him. 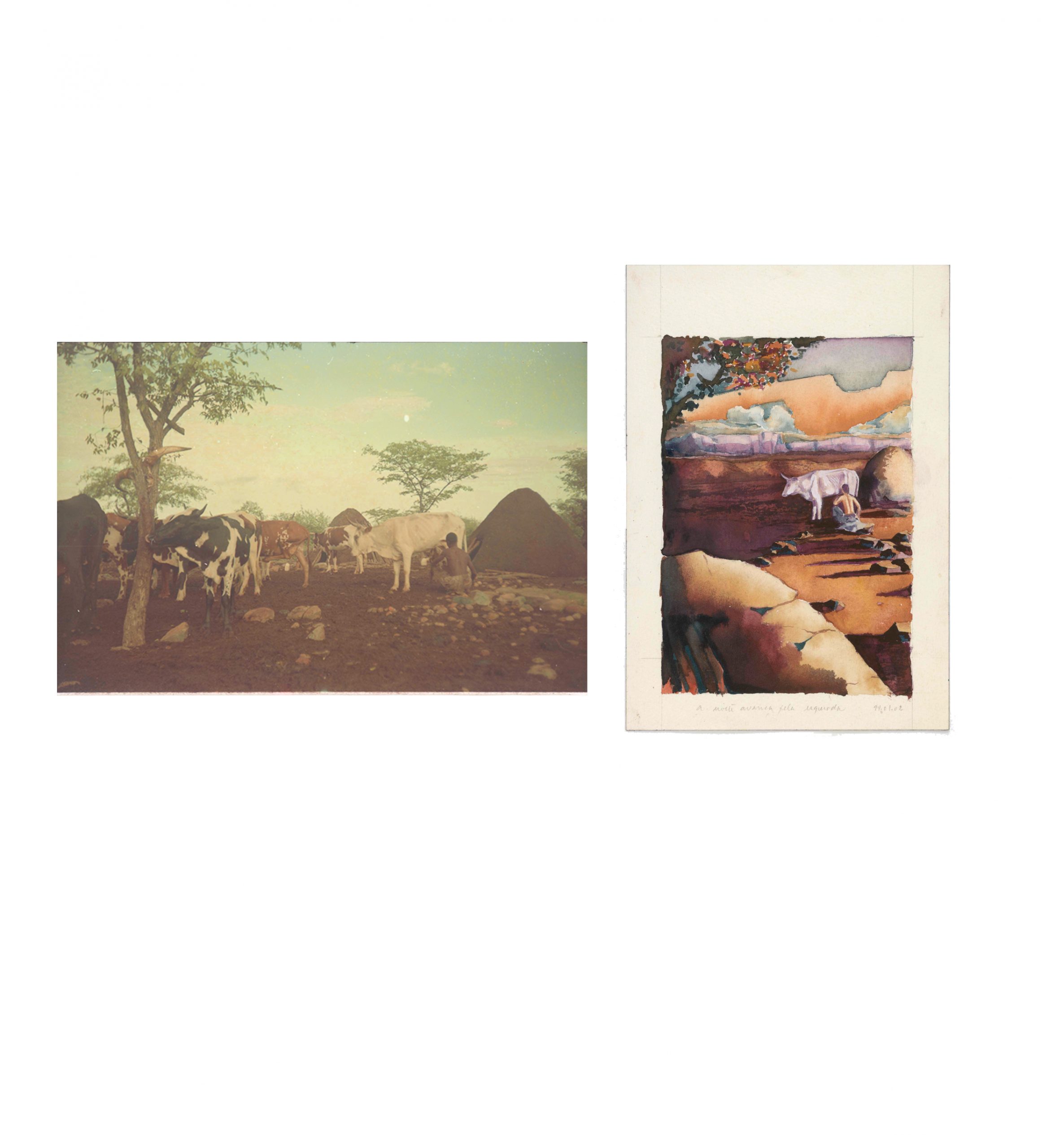 Figure 6: An imaginative leap I.

Unpublished first frame of the roll 15w/1993 and related watercolour, titled "the night comes from the left".

This roll depicts cattle in the early morning waiting for the milking to finish and to be released from their kraal, at a temporary site. Carvalho painted watercolours inspired by many of the frames that follow it, depicting the cattle waiting. 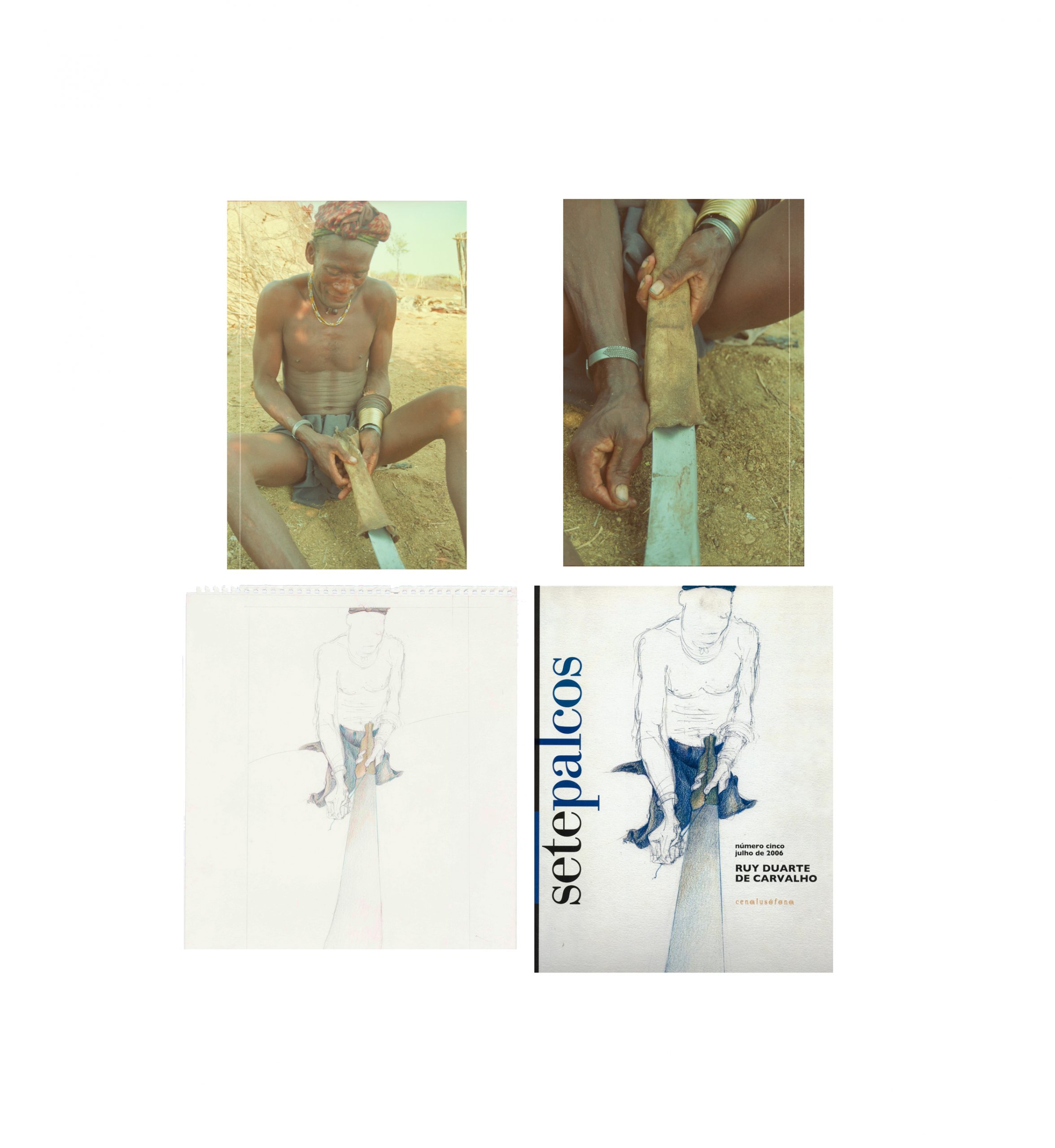 Two frames from R26w/1994E, juxtaposed with an undated drawing and the cover of SetePalcos (2006), dedicated to his work. Carvalho had photographed other similar situations in previous trips; this drawing appears inspired by both frames rather than emulating a single image.

Being skilled to make and mend fundamental tools, or know who is, is fundamental for people who live from a subsistence economy. Leather is one of the materials shepherds often use and learn how to make utensils, such as a holder for a daily used manchete Carvalho photographed and was inspired later to draw. 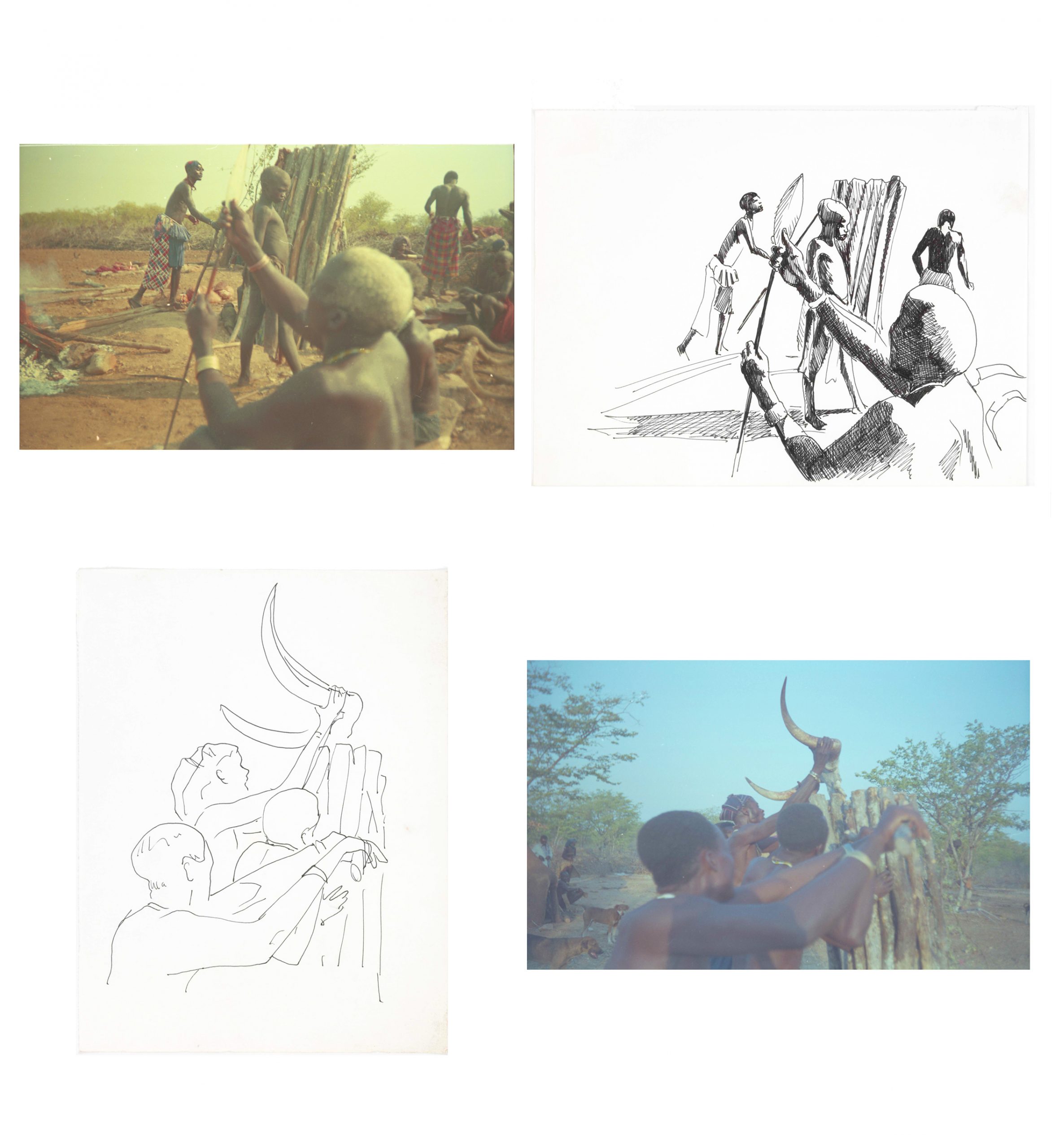 Frame from r30w/1994G and r32w/1994O, juxtaposed with Carvalho’s undated ink sketches. I first taught these were drawings from an earlier phase (1960s)

The image depicts men fitting the horns of a dumenthu on the thifa.